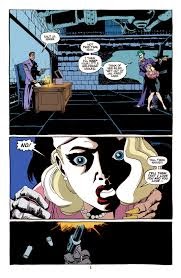 Everybody loves a holiday. Except when a man named Holiday is killing people.

When you’re three or four years into a job you often start to think about getting a promotion. After all, you’ve learnt your trade and paid your dues. It’s time to move on to more money and more respect. This is true for most of us, but not for Batman. In Dark Victory, our favourite Dark Knight has a series of murders to solve.

Dark Victory features some classic Gotham characters - like Penguin and Joker - and classic Batman-universe storylines – a breakout from Arkham Asylum, shock, horror- and mixes them with a brutal territory war between Two-Face and the mob. The story is entertaining and gripping, and many see it as a solid sequel to the hard act to follow that was The Long Halloween.

Where Dark Victory falls down is the similarity in its storyline to that of The Long Halloween. You have to feel that this was a conscious choice of creators Jeph Loeb and Tim Sale due to the success of Dark Victory’s predecessor. The similarity is only a small quibble though because this Batman comic has a lot going for it.

It’s not the best Batman graphic novel, as you’ll see for yourself later in this list, but it is definitely a book every comic fan should read. As well as delivering an exciting storyline Loeb and Sale delve further into the messed up dungeon that is the Dark Knight’s mind and they give us a crisp new look and Gotham and it’s favourite vigilante.

Better novels are going to follow this work, but even so Dark Victory earns its place on our best-of list.