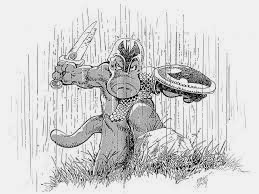 If you are looking for a graphic novel to really get sunk into, the kind that rivals Tolstoy’s War and Peace for page length, then believe or not you need to turn to a story about an aardvark. The creation of Canadian comic illustrator Dave Sim, Cerebus spans six hundred pages and recounts the adventure of Cerebus the aardvark.

You might think an aardvark is a strange choice for the main character of a graphic novel and I’m not going to disagree with you. I don’t know many aardvarks, but the ones I do know are rubbish. They spend their day burrowing and scratching around in the dirt and generally looking pig-like. Cerebus is nothing like that, because he’s the best aardvark there is. Over the course of the comic’s epic running time our favourite aardvark takes on a variety of jobs from prime minister to pope.

What started in December 1977 as a simple animal-based Conan the Barbarian parody quickly turns into a complex, long running and intriguing graphic novel story and you’ll spend many hours with Cerebus nodding sagely as he using his wits to yet again fool his stupid adversaries.  The best thing about this work is that because of how long it runs you can see the creator’s skill evolve over time. Sims’ artwork undergoes changes throughout the many volumes and it’s interesting to see the progress of an artist laid out in front of fun. Cerebus is a fun and clever read, and it’s excellent if you’re stuck in lift for a week and need an endless supply of reading material.

The only bad thing I have to say about this collection is that it can be a slow burner and if you’re impatient you may not be able to get fully into this comic.  I enjoyed it from the start of volume one, but it took until volume two for me to be completely hooked. The same can be said of the TV show the Wire though, and giving that a chance is one of the best things I’ve ever done. Give Cerebus a try.