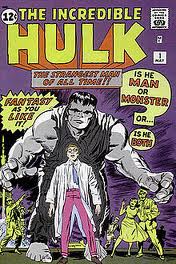 With his tank-crushing green frame and furious temper, the Hulk

is the most recognizable Frankenstein/ Jekyll-Hyde mishmash in the comic book world. He is so distinct that even someone who has never read a comic book will probably be able to identify him. He was created by Stan Lee (surprise surprise), Jack Kirby and Paul Reinman in 1962, and since them the destruction-machine has starred in hundreds of comics as well as countless crossovers, most notably in Avengers.

What is it that makes Hulk so popular? A massive part of it is his literal representation of a split personality. His normal persona is Dr Bruce Banner, an introverted scientist who designs a gamma bomb, and through an accident with this device, is turned into the Hulk. Like Jekyll and Hyde, Banner's transformations are sporadic, and he is himself when he is in Banner form. Unlike Jekyll and Hyde, his transformations are involuntarily and usually brought on by strong emotional surges, anger being the most common. You must have heard the quote: "Don't make me angry. You wouldn't like me when I'm angry." It's from The Incredible Hulk TV series, it wasn't always a bad joke used by your dad.

Picking the best graphic novel out of the whole Incredible Hulk

collection is difficult, but I would recommend you check out Incredible Hulk Visionaries Volume 1 by Peter David. This book is the Hulk grown up, with mature story lines and very serious character development. Bruce Banner is given darker sides to his personality (as if being the Hulk wasn't bad enough) and the Hulk is involved in his own struggle for an identity. If you prefer the classic Hulk that you see on film and TV, just check out the character from his grass roots and buy the issues that Stan Lee wrote in 1962. Either way you can't go wrong, and it can't be a surprise that the Hulk claims a spot in our top 100 list.