Read this if you like: X-Men, twists on popular superheroes, violent storylines. 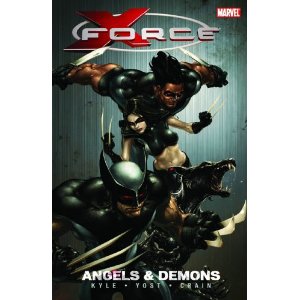 There have been hundreds of X-Men spin-offs created over the years, but one in particular is worth your precious time: X-Force. Created by Rob Liefeld, who earned his graphic novel fame on Marvel's New Mutants, X-Force is for people who grew up with X-Men but are looking for something tougher.

What you need to decide is which X-Force comic will be your favourite? The New Beginning, where a young group of mutants are groomed to be media starlets? Or maybe Angels and Demons, where the X-Men are given black commando uniforms and carry out black-ops style missions? There's a lot for you to choose from, and hard to decide which comes out on top. I like them all, and it would be hard to pick a favourite.

Liefeld gave the X-Men universe big, sharp teeth and set it loose on the page. The themes that dominate the graphic novel are violence, retribution and cruelty, with blood splatters and forced-heroin injections everyday stuff. For the mature graphic novel reader, X-Force offers violence and destruction that is difficult to top, and throws in good characters to boot.

So, the characters. First off, the X-force team are not the X-Men (though later Wolverine leads the team). Liefeld started his comic with Boom Boom, Cable, Cannonball, Domino, Feral, Shatterstar and Warpath. A rag-tag bunch of well-drawn characters, this roster gave fan's heroes they could root for, as well as stories that drew you in. There are lots of rewards to be had for long-time X-men readers though with many of your favourite characters making an appearance.

This, coupled with Liefeld's artwork, made the X-Force graphic novel a major success. So successful that it is currently the second highest-selling American comic ever. No mean feat, yet we also know that numbers don't mean everything. After all, one Saturday night X-Factor pulls in more viewers than the entire five series of The Wire.

So what we have to ask ourselves is, does X-Force earn its status as one of the top graphic novels? Well, just ask most of the people who have read it. They'll tell you how much they love it.