#98 - The Punisher Max by Garth Ennis

Read this if you like: mature themes, violence, gangsters, revenge stories. 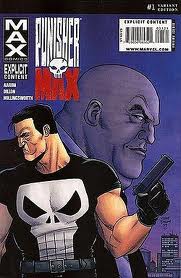 Frank Castle is an awesome character. Better known as The Punisher, the graphic novel hero takes a dirty fight right to the mob's doorstep without flinching for a second. His motivation is the death of his wife and children, which is something we've often seen in fiction, but what makes The Punisher great is how he gets the job done.

Murder, torture, coercion, and violence are things I deplore in real life but in fiction, and used in the right hands (and on the pages of a comic book), find gripping. Created by Gerry Conway, John Romita Sr and Ross Andru in 1974, The Punisher has been terrorizing the Mafia in mainstream graphic novel fiction for decades. Part of the reason for this is his high-sympathy motivation coupled with his dark anti-hero image. We all know the best kinds of heroes are anti-heroes.

Despite years of popularity, there comes a time when every series must change, and for Frank Castle this came with The Punisher Max, a series of comics penned by Preacher writer Garth Ennis. The Punisher Max takes the dark subject matter of the The Punisher and pushes it over the top, bringing gritty storylines that just weren't possible in the mainstream Marvel Universe playground.

A lot of fans had waited a long time for this. Although Ennis had done a respectable job on his previous Punisher stories, he hadn't been given freedom to write the kind of stories he wanted to. This meant that his previous Punisher comics, although good, lacked edge and were somewhat toned down compared to what mature fans were loloking for. Punisher Max changed all this - it gave Ennis freedom to write about whatever wanted, use plenty of violence and talk about some pretty adult themes.

This is one of the best Punisher stories ever written, and its adult themes of swearing, gore and sex introduced the legendary character to a new generation of graphic novel fans. This is mature reading and not for the faint-hearted comic fan, but I heartily recommend you read it regardless.

Buy the Punisher Max on Amazon: US Readers     UK Readers