Read this if you like: Twists on popular superheroes, superhero soap-opera, Batman and pals. 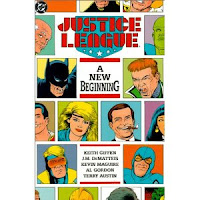 Superheroes, of course, are a staple of the graphic novel world, and any superhero worth his salt has been in the Justice League. There are names that you might have heard of such as Superman, Batman, Wonder Woman, Flash, Green Lantern and Aquaman, and in just the last ten years there have been 5 movies made from these characters. They are some of the best the comic world has to offer.

So, what makes Justice League one of the top 100 graphic novels? Well it is important to note that this comic is a relaunch, and that it brought fresh life to something that was becoming tired and clichéd  Kind of like how the mini was updated several years back, taking an old classic car, rejigging the bodywork and coming out with something brand-spanking new. The best thing about Justice League: A New Beginning is the new feel it has brought to a series that was not wearing thin exactly, but certainly getting grey hairs.

Aside for the fresh and exciting writing, A New Beginning's main strength was the artwork of Kevin Maguire. This was his first job on a major comic book and picking him was a bit of a gamble by DC, but man did it pay off. He helped rejuvenate tired, old characters, and he brings DeMatteis's writing to life.

Justice League is great because it takes you inside the superheros lives. It is the stuff I imagine happens during ad breaks on TV - the characters argue, bicker, reveal self-conscious traits. It really makes you feel for the characters drawn on the page, and when things go wrong, you're sharing their pain. The writers have done a great job making the characters fully developed.

This graphic novel is one of the best team superhero stories ever written and it was a high point in comic book history. When you read Justice League: A New Beginning you should look out for the Grey Man storyline, which is a stand-out in the book.

Check out Justice League on Amazon: US Readers     UK Readers