Read this if you like: Ghost World, strange imaginations, humour. 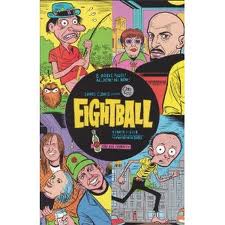 Daniel Clowes earnt his fame for his work on Ghost World, the mature graphic novel that was turned into a film starring cult legend Steve Buscemi. Before Clowes hit his fame, he spent his time on Eightball, a short, humorous and downright weird alternative comic. It is one of the best ever created and worthy of a place on our top 100 graphic novels list.

When drawing a list of compliments for Eightball, the first on it has to be its humour. Full of crude illustrations, topical rants and glistening with satire, Eightball is at it's best when it has you flitting between laughing your ass off one minute and then scratching your head saying "what the heck?" the next.

This is because this book is the result of a downright weird imagination let loose. Clowes was seemingly given, or gave himself, no limitations on the subject matter of the stories in this comic, and it means that although it is sometimes confusing, the whole thing is completely original. These aren't stories ideas you will have seen retreaded or repeated elsewhere; Eightball is a unique experience.

If you're looking for a deep study into a character's mind then you're best looking elsewhere on the top 100 graphic novels list. This comic isn't so much a character study as an invitation to step into the head of writer Daniel Clowes. The stories are short and always keen to move on, but this is for the best. This is a book you can read in bursts, so it is perfect for people who have ten minutes to spare here and there. If you're one of these people, you should give it a try.

If you want another reason to make Eightball your next comic purchase, how about this: a high school teacher in Connecticut once gave a copy of Eightball to a student as a reading assignment. This set the student's parents in a wild panic, and the stink they kicked up put ended with the teacher being put on leave and eventually resigning.

All this over a comic. Ridiculous, right? If you think so too you can do your bit by reading Eightball and then passing it on to one of your friends. It's the best thing you can do to strike back against ill-informed people who try and censor something they probably haven't even read.