Read this if you like: Superhero solo-outings, Japanese clan culture, lots of violent action. 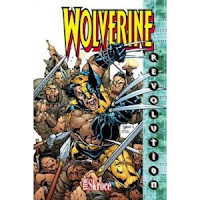 When I was searching to buy Wolverine: Blood Debt before I started writing the top 100 best graphic novels list (no idea what I did with my original copy), I used Google just like everyone else. The first results were pretty much what you'd expect; links to buy the comic. That was cool, because that is what I was looking for.

For some reason, I decided to look further down the search results, and I found myself laughing when I saw a link to a page with the title: How many people has Wolverine killed? Of course I clicked the link to see what was behind it, and it turned out to be a forum. Someone had answered the author's sincere enquiry into Wolverine's body count in the best possible way - he just said "thousands".

Wolverine is one of the best and most beloved of graphic novel characters. Known widely for being part of one of the best superhero teams in the comic universe, Wolverine is such a popular character that he has had plenty of outings of his own. Now, it's difficult to pick one out of all of his graphic novel adventures and call that one the best, so I have so settle for recommending one of the best ones written. It is for this this I recommend Wolverine: Blood Debt, but I also say you should check out the other Wolverine books, because there are loads out there.

Blood Debt will appeal most of all to Wolverine fans then to X-Men fans, but if you're a fan of superheroes or graphic novels in general it is well worth checking out. It is quite violent, perhaps too much so for some, but there is plenty of action and great artwork. This is the kind of story that helps a character standout on his own and build a fan base. It is a great introduction for anyone wanting to give some of the Wolverine solo runs a try.

Wolverine: Blood Debt is one of the best Wolverine comics set in Japan, a country significant for the man with the metal spine because it is where he learnt how to control his anger. The story is about a clan feud, honour and betrayal, and even though it isn't a work of great originality, it is the Wolverine's characters that pulls this through, as well as the quality artwork, but you can see that for yourself.

Check out Blood Debt on Amazon: US Readers     UK Readers