Read this if you like: Dystopian societies, apocalypse stories, a great comic premise. 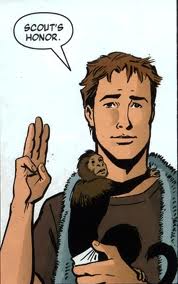 If you like your fiction dystopian, you're spoilt for choice. There are so many films, books, video games and even poems that cover this kind of subject matter. Think Mad Max, I Am Legend, The Fallout series, The Walking Dead. I love the genre myself, and I could talk about it all day. There's something about the fall of humanity and wondering how the last few scratches of people scuttle about their lives that makes for riveting fiction. Number 92 in our top 100 graphic novels list fits in perfectly with the dystopia genre. I'm talking about Y: The Last Man.

Y: The Last Man deals with a storyline that has been a staple of Twilight Zone writers and B-movie directors for decades- that of the last man on earth. Where this graphic novel differs is that protagonist Yorick Brown is indeed the last man on earth, but all the women in the world are fine. It turns out a plague has hit anything with a Y chromosome, leaving poor Yorick in what must be every guys dream; a world where he's the only man alive in a sea of women.

It's a fascinating premise for a comic, and that enough should get you reading it, but it only gets better. Writer Brian Vaughan does great thins with the story, and although I won't ruin any of it for you, let's just say that Yorick's situation isn't as great as it sounds. I guess if it was, this wouldn’t be a very good book.

I try and keep these things balanced, so it's only best I tell you some of the criticisms Y: The Last Man has garnered. These are mainly to do with the artwork, which some feel is bog-standard, one-dimensional and sometimes doesn't do the great writing justice. I don't agree with this, but I will leave you to make a judgement for yourself after you buy it.

But this is the top 100 list, so every graphic novel on it is great, and with that in mind I'll tell you that Y: The Last Man excels by getting rid of the clichés of the 'last man alive' genre and replacing them with an original and nightmarish world, one that quickly turns from a dream-come-true in the reader's mind, to a nightmare straight from the slumbers of Satan after he has eaten a block of cheese.

Like a lot of the graphic novels in the top 100 list, a film company has acquired the rights to put Y: The Last Man on the big screen. As of 2007 the writer/director partnership behind the film Disturbia have been attached, though luckily Shia Labeouf, main lead in Disturbia, has ruled himself out. I guess that leaves him free time to spend ruining Indiana Jones.

You should really read the comic before Hollywood botches a film version of it.