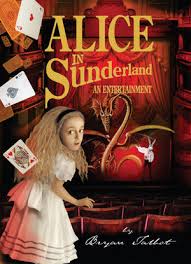 Now for the first real controversial placing in our top 100 graphic novels list. I can already feel the backlash on this one and it isn't pretty, but the truth is I agonised over placing this particular book in this particular position, because I know some people will want it higher. I’m talking about Alice in Sunderland, and it is coming in at number 89 in our list.

Alice in Sunderland is Bryan Talbot’s exploration of the links between Lewis Carrol, who you probably know as the author of Alice’s Adventures in Wonderland, and the English city of Sunderland. The main focus in this comic is on local history, with the North East Geordie area getting page space in a unique way. You’ll read all about local history as well as the myths and legends of the area, including a notable story of a monkey being hanged in Hartlepool. I won’t say too much about this, but according to the legend, said monkey was the only survivor of a French ship that was chased off the coast of Hartlepool. Ever since, residents of Hartlepool are lovingly referred to by some as ‘Monkey hangers’. Well, there are worse things you could be called.

You might already know Brian Talbot from The Adventures of Luther Arkwright, a British underground comic that features adult stories, cigars and biker nuns. In Alice in Sunderland, Talbot takes his graphic novel chops in a different direction by twisting the story of Lewis Carroll around a maze of facts and actual information, that is, information with educational value that you will benefit in some small way from learning. It’s not every day you can say a comic book gave you that.

It’s best that I don’t give too much away about this comic in case you intend on buying Alice in Sunderland, but what I will say is that this book was a few thousands miles south of what I expected. In truth, it's hard to define what I thought it was going to be, because before I read it, all I had to go on was the title and a tirade of hype from other graphic novel fans. I thought maybe it would be some sort of Alice in Wonderland – modern day mish-mash, where maybe a modern day girl finds herself tumbling down a rabbit hole. Instead, I got a book that is more like Alan Moore’s From Hell. If you’ve read From Hell, you will know that this is very much a compliment.

When I said that I agonised over Alice in Sunderland’s placing in our top 100 graphic novels listing, it is only because I thought I should put it higher. The fact that I didn’t is just a testimony to the top quality of work that appears in the list, and I would very much recommend you read this book.