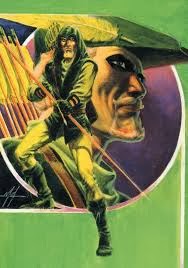 Green Arrow was originally meant to be a kind of Robin Hood-style Batman; the Dark Knight except green, with a hooded costume instead of the batsuit and a hundred different types of arrows instead of the utility belt. Things didn't pan out quite like DC Comics hoped though, and the writers of Green Arrow soon turned him into his own, unique character rather than a Batman clone. Good thing they did too; I doubt it would have lasted eleven series if it had stayed an archery themed Dark Knight.

Green Arrow was used off and on in several comics as early as 1941, and he languished as a bit part character for forty-six years until 1987, when DC Comics launched an updated version of the character. Put in charge of writer and illustrator Mike Grell, who has worked on Green Lantern and Iron Man, Green Arrow was thrust into a mini-series titled Longbow Hunters. It is the work of Grell that has put Green Arrow in our top 100 best graphic novels list.

Ditching the trick arrows and moving to Seattle, Longbow hunters is a grimier Green Arrow. Ollie Queen, aka Green Arrow, is on the trail of a serial killer who is targeting prostitutes, when he runs into the path of the daughter of a Yakuza agent. Oh yeah, and then girl is also an archery expert.

The mature plot line and great illustrations relaunched Green Arrow and made him accessible to adult graphic novel readers. It has stood the test of time too; even now, twenty-five years after release, I could still take it out of my cupboard and start reading again, and I bet by the time I looked up from it's pages I'd have lost five hours. That's if you can call five hours of quality reading time 'lost'. Green Arrow is a great addition to our top 100 best graphic novels list.