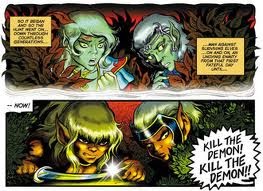 Now onto our first cult hit of the top 100 list. Elfquest started as an indie comic, written and illustrated by husband and wife team Wendy and Richard Pini. They kicked the comic off in 1978, with the first issue being released by a publisher that immediately went bust. Over the years, Wendy and Richard developed Elfquest and nurtured its fan base until 2003, when they linked up with DC Comics. Elfquest is a graphic novel beloved to its army of fans, but isn't well known outside of them.

The story is set on a planet much like earth, except it has two moons and has a multitude of fictional species trying to live on it. Okay it's actually quite a bit different from earth. In Elfquest, you don't get gritty realism, you must start reading this comic knowing full well that you're walking into the realm of the fantastic. In Abode, the name of the planet, there are species like the Wolfriders, Sun Folk, the High Ones and Gliders.

Elfquest is a swear word in some internet forums. There are some comic book fans out there who loved the series, but have become bitter about the death it now languishes in. Many find fault with the Pinis themselves, blaming them for the death of their own creation. Whether this is right or not, I don't want to argue. I do find it interesting that some blame the Pinis though, because this suggests that Elfquest has grown out of being a work of a creator, and become something in itself.

For so many people to get upset about a work of fiction ending, there has to be something extra special about it in the first place. That is why you should check out Elfquest, and it is why it gets a respectable place in our top 100 graphic novels list. If you are looking for a good story, appealing visuals and a deep world, Elfquest is for you. Give it a try if you usually turn away from the gritty realism in some comics and lean toward the magical and fantastic.