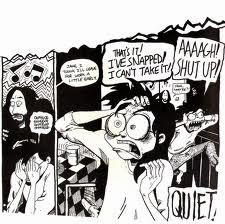 Alex Robinson's Box Office Poison is an epic story of the lives of a group of New York residents, charting their triumphs and disasters over six hundred black and white pages. It is a graphic novel so long that you can get lost in it, and you come to know the characters better than you know some of the people in your own life.


The cast includes Sherman, a book store clerk who hates his job, Ed, a cartoonist and Sherman's friend, Dorothy, Sherman's girlfriend, a history professor named Stephen and two cartoonists called Jane and Irving. Their struggles are the type that real people face, such as battling a greedy ex-employer, enduring a job you hate and the difficulty in trying to make it to the top of a competitive industry. You aren't going to read about magic and superheroes when you buy this graphic novel; instead, you get a slice of real life.

The creator, Alex Robinson, has always worked on this side of the genre. As well as Box Office Poison, the forty-two year created Tricked, a story about six people who, on the face of it, have nothing to do with each other, but as the graphic novel goes on they start to meet and form relationships. Robinson has made a career out of examining the connections between people, and characterisation is his forte. This is especially evident in Box Office Poison.