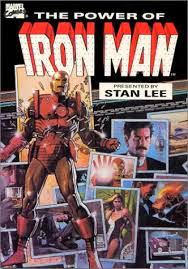 I'm guessing you've heard of Stan Lee? He co-created the Fantastic Four, the Hulk, the X-Men and Thor. But you already knew that. In any case, that's an impressive roster by anyones standards, and it is what has made Stan Lee a name synonymous with comic books and graphic novels. As well as creating the legendary characters above, he also gets credit for giving birth to number 83 in our top 100 list – Iron Man.

A mix between Hugh Heffner and McGuyver, Iron Man is billionaire playboy Tony Stark, a man whose massive wealth is dwarfed only by his monster ego. One day Stark is captured by terrorists who force the genius engineer to build a weapon of mass destruction. He doesn't much fancy doing that, so instead he builds himself a suit of armour. Thus, Iron Man is born.

The Power of Iron Man brings together issues 120-128 of the top graphic novel series, telling the tale of Tony Stark's fight against Justin Hammer, a resourceful villain who leads an army of underworld mercenaries. Stark finds himself up against Hammer at every turn, but he is not Stark's only enemy; the playboy hero must also battle himself, namely his love of alcohol. His alcoholism is a character trait that sets him apart from other comic characters, and his own internal battle is every bit as fascinating as his outside struggles against Justin Hammer.

Iron Man has been getting quite a bit of attention of late, with two solo outings on the cinema screen as well as equal billing in one of the most anticipated movies of 2012 – Avengers Assemble. His first solo outing, directed by Jon Favreau, was a successful one for the character; it put bums on seats and garnered good reviews. Iron Man 2 was a less successful, but still solid, outing. At the time of writing, Avengers Assemble has been out for four days and is getting great reviews. The future looks great for Iron Man, and he gets a respectable placing in our list. Stay tuned, because there are lots more to come, and this isn't the last Stan Lee character you will see getting a place.

Read The Power of Iron Man: US Readers   UK Readers