Read this if you like: Crime stories, strong female characters , The Good, The Bad and The Ugly. 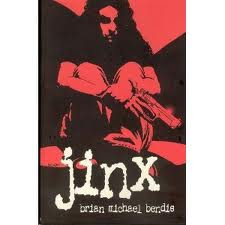 The first book on our list is a crime-noir spin on The Good, the Bad and the Ugly. Just take away the cowboys and bandits and add a female bounty hunter and two grifters (if you don't know, a grifter is a practitioner of confidence tricks) and you have Brian Michael Bendis's Jinx.

Jinx isn't about gunfights, explosions and capes. You don't get the usual graphic novel collection of superheroes with powers no real person could have; instead you get three ordinary people tangled in a crime caper, and this is where Jinx excels - the characters.

We've all felt lonely at some point in our life, and that is why this comic will connect with you.  The title character is a female bounty hunter desperate to avoid a slide into a life of crime that has swallowed everyone she knows. Her flaw is her loneliness, and to this end she gets messed up with two grifters, Goldfish and Columbia (Bendis himself served as a model for Columbia). Goldfish, nice guy grifter, is trying to claw his way out of the conman life he has spent so much time in, while Columbia, dumb grifter, gets swept wherever his foolish actions take him.

Bendis goes to great pains to make his graphic novel characters real enough to touch. This is in a large part down to the realistic, and lengthy, dialogue that's sprayed throughout the comic. Bendis isn't interested in creating something you can skim through, half-wondering whether the heroes find the treasure. He wants us to breath in this world.

To do this he makes some seriously bold choices, like a nineteen page segment where background characters in a shopping mall, extras almost, are given something to say. They have their own lives, dilemmas and needs, and they tell us them. And then they are never seen again. Yet we feel sucked into Jinx's world because of it.

Jinx is what happens when Tarantino gets fused into a comic and twisted with Sergio Leone. One of the most popular indie books created by one of the most successful comic writers, Jinx is one of the best graphic novels ever written, and some say it is Bendis' greatest work